On July 1, 2017 significant changes to Indiana’s Medical Malpractice Act, Ind. Code § 34-18-1-1 et seq. (the “MMA”) went into effect.  Most notable of these changes was an increase in limitation of damages recoverable, from both the underlying healthcare provider, as well as from Indiana’s Patient’s Compensation Fund (the “PCF”).   These limits are set to increase again on July 1, 2019.

Two years ago, for a claim of medical malpractice, the maximum liability of the underlying healthcare provider increased from $250,000.00 to $400,000.00 for acts of malpractice occurring between July 1, 2017 and June 30, 2019.  Likewise, the amount of total damages recoverable increased from $1.25 million to $1.65 million, (i.e., an increase of excess damages available through the PCF from $1.0 million to $1.25 million).  Built into the changes enacted by the Indiana legislature in 2017, was an additional increase on the limitation of damages, which is now set to take effect on July 1, 2019.

When the winds of legislative change began pointing to an increase in the MMA’s damages limits, concern was raised on how the increased limits would affect the cost of insurance for Indiana healthcare providers.  This was due, in part, to the fact that when the MMA was originally enacted in 1975, one of the fundamental purposes of MMA was to keep the cost of insurance down.  Capping damages would, in theory, result in lower health care costs, allowing greater access to healthcare, as well as improve the quality of health care in the state as the best and brightest physicians would be drawn and retained, in part because the cost of their malpractice insurance was low.

Concern was had that the legislated increases to the underlying limits payable by the healthcare provider’s insurer, would result in a significant increase in the premiums charged for professional liability insurance policies.  Moreover, because the PCF is funded through “surcharge” payments by the healthcare providers, the assumption was that surcharge amounts would also significantly increase during this time period, as the cap on damages available from the PCF also increased.

While insurance premium amounts are generally not publically available, the MMA requires the Indiana Department of Insurance (“IDOI”) to contract with an actuary to determine the actuarial risk posed to the PCF and establish surcharge amounts based upon those actuarial principles and studies.  I.C. § 34-18-5-2.  Part of this process involves the collection of data to determine the statewide median premiums collected by the three malpractice insurance carriers who have underwritten the most malpractice insurance policies for physicians.  I.C. § 34-18-5-2(f)(1).  Review of that information, publically available on the IDOI website (1), shows that while the reported median premiums have increased since 2016, those increases have, in general, not been significant and have not been in proportion to the underlying damage cap increases. 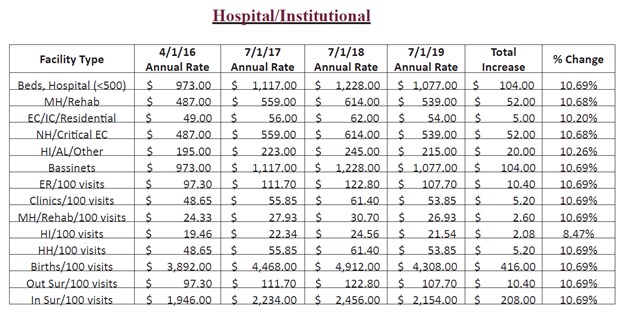 Certainly, much of this could be reflective of the MMA’s two year statute of limitations. Even the earliest claims under the most recent cap increase, (i.e. claims that occurred on July 1, 2017) are still not time barred.  In addition, while the recent changes to the MMA stress the importance of moving through the process quickly through a more strict adherence to deadlines imposed by the MMA and the Medical Review Panel Chairperson, (See, I.C. § 34-18-0.5-1 “Adherence to timelines”), many cases that qualify for the July 1, 2017 increased damage caps, most likely have not progressed to the point of settlement or judgment whereby the PCF has begun to pay out its increased limits.  All of this is promising information for healthcare providers in Indiana.  To date, the increased caps on damages available to patient’s under the MMA have not resulted in a significant increase in premiums or surcharge rates charged to the providers.  While it is still early in the process from a litigation standpoint, there is new hope that the increased damage caps will not have a significant negative effect on the cost of insurance.

2 Physician class 9 was first established in 2017 Rob Brandt has been with Riley Bennett Egloff since 2004 and is a member of the firm’s management committee. Rob practices primarily in civil and business litigation, with an emphasis in the health care field. He handles all aspects of medical malpractice defense litigation for long-term care facilities, hospitals and other health care providers, before Medical Review Panels and courts throughout the State of Indiana. Rob’s practice also focuses on representing insurance clients in regulatory matters before the Indiana Department of Insurance.

Prior to joining Riley Bennett Egloff, Rob served as a deputy prosecutor in Hamilton County Indiana, where he successfully prosecuted misdemeanor and felony offenses in numerous jury and bench trials.

Permissions: You are permitted to reproduce this material in any format, provided that you do not alter the content in any way and do not charge a fee beyond the cost of reproduction. Please include the following statement on any distributed copy:  “By Robert C. Brandt  © Riley Bennett Egloff LLP – Indianapolis, Indiana. www.rbelaw.com”